Cinema films and video/DVDs are given certified or classified by IFCO, Irish Film Censors Office.
IFCO's approach is guided by three main principles and these are:

1. They believe that adults (i.e. persons over 18) should be free, within the law, to choose what they wish to view.
2. They have a duty to protect children and young persons from harm.
3. They strongly encourage and promote the exercise of parental responsibility.

A film classified as 'General' should be suitable for children of school going age. Not every child will respond in the same way to particular themes, scenes and images. What might amuse one child, may upset or frighten another, so parents, who know their own children best, should decide what is appropriate.

Theme / Content:
The film should not be concerned with serious or moral issues which might confuse or disturb a young child.

Context:
In overall terms, the film should be within the comprehension of a child and good and bad should be balanced in a positive way.

Violence:
If any violence is present, it should be mild, perhaps comedic or cartoon-style, and there will be a complete absence of any serious threat, menace, blood or imitatable techniques.

Sexual Content / Nudity:
If present, it will be very mild and non-graphic, e.g. kissing, dating, etc.

A film with a 'PG' cert may be watched by unaccompanied children of any age. However, because some element within the overall film might be unsettling for younger children, parents are strongly advised to satisfy themselves in advance as to whether the film is appropriate for their younger children.

Theme / Content:
Stronger issues, e.g. violence or war, may be be dealt with, but there will be a generally positive or redemptive resolution.

Context:
A film classified in this category may have a context of mild threat, but it is likely to be one that children can understand and handle.

Violence:
This should be justified by the context and should be non-imitatable and non-explicit (e.g. fantasy violence, westerns, etc).

Sexual Content / Nudity:
Sexual content or dialogue will be mild and may be implied rather than shown, and any nudity will be natural and non-sexual.

Drugs:
Any references, which will relate only to 'soft' drugs, will be mild.

Language:
This will be mild.

Minimum age: 12 / unless accompanied by an adult

Films classified in this category are considered to be suitable for those of twelve and upwards. They may also be seen by younger children provided a parent or adult guardian accompanies them.

Theme / Content:
Films classified as 12A are likely to feature more mature themes, e.g. Involving crime, conflict, relationships, etc., but young persons of twelve and over will already be familiar with them from their television viewing.

Context:
IFCO try to retain a flexibility of approach and look at the context and impact of the film as a whole, rather than rating it only on the basis of one short image or scene.

Violence:
This should be relatively mild or moderate and it should not be imitative, gratuitous, nor glamourised.

Drugs:
Mild or brief images of 'soft' drugs may be permitted in an appropriate context, but normally no images of or references to 'hard' drugs are acceptable.

Minimum age: 15 / unless accompanied by an adult

Films classified in this category are considered to be suitable for those of fifteen and upwards. They may also be seen by younger children provided a parent or adult guardian accompanies them.

Theme / Content:
Most themes/content will be acceptable with classification normally decided by the way the subject is treated. It is worth noting that our recent nationwide survey research confirms that both parents and adolescents often experience embarassment when they view films featuring more mature themes (eg. sexual activity or nudity) in each other's company.

Context:
Modern adolescents of fifteen and older will generally be aware of, and be able to appreciate, the context of a film.

Violence:
This may be realistic but not gratuitous, prolonged or overly bloody. We take particular account of the way in which sexual violence is portrayed.

Drugs:
Scenes/dialogue relating to drugs may be acceptable in an appropriate context, but not if there is instruction or encouragement as to use.

Films classified in this category are considered to be suitable for persons of sixteen or over. Children under this age cannot be admitted to cinemas.

Theme / Content:
Most themes/content will be acceptable with classification normally decided by the way the subject is treated.

Context:
It is assumed that adolescents of sixteen and over will be able to appreciate the context of a film.

Violence:
Violent content and depicition of violence may be stronger than in films designated 15A. We take particular account of the way in which sexual violence is portrayed.

Drugs:
Scenes/dialogue relating to drugs will be acceptable if the context is appropriate, but not if there is instruction or encouragement to use.

IFCO operate on the basis that, as adults, persons who are eighteen and over should be free, subject to the law, to watch what they wish. 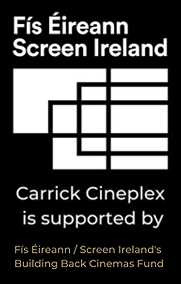