Carrick Film Society and Carrick Cineplex are delighted to present a new season of Art-house, World & Indie Film for the new Spring 2018 season.

Join us every Thursday for screenings starting at 8.30pm from 25th January. 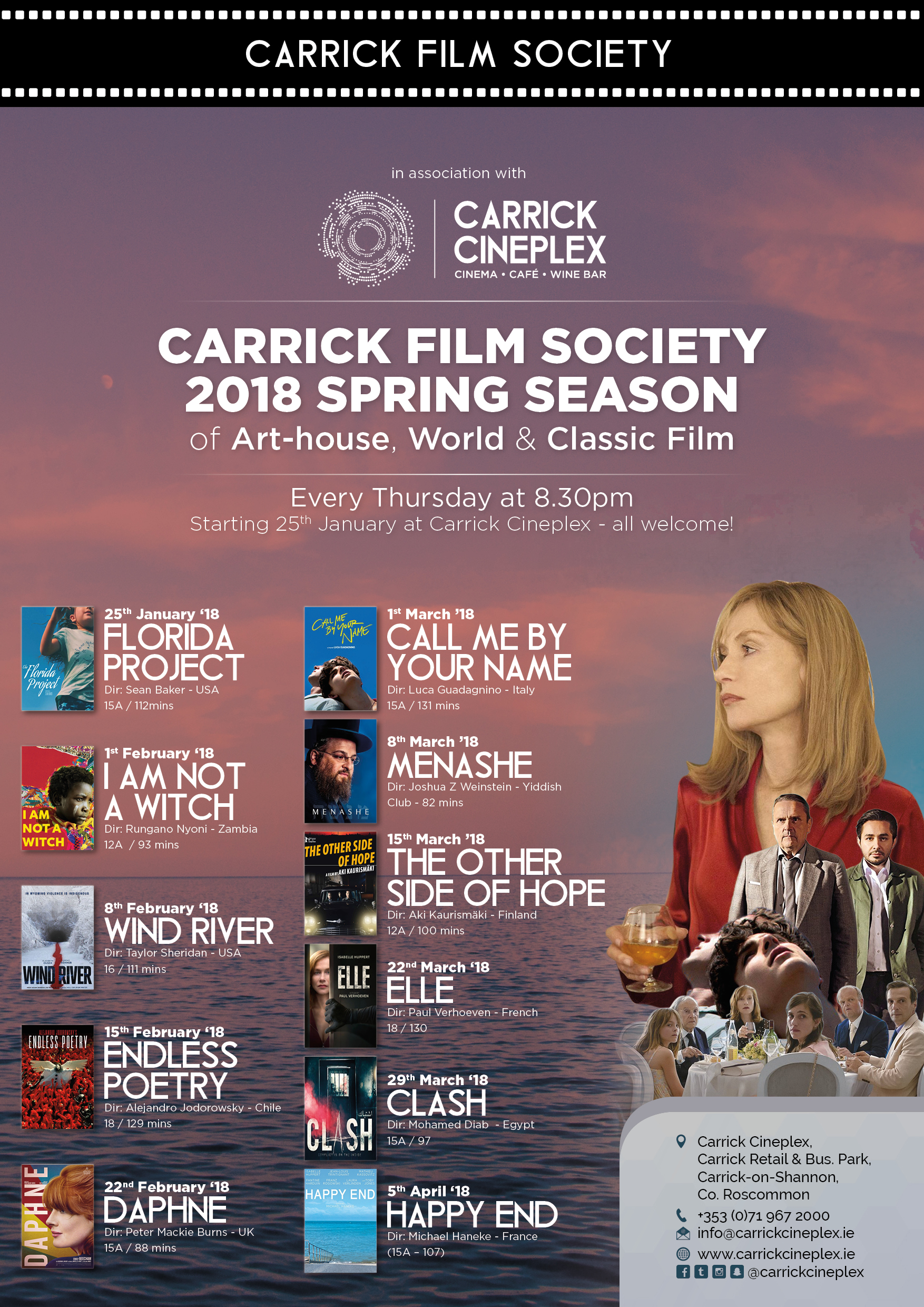 Set over one summer, the film follows precocious 6-year-old Moonee as she courts mischief and adventure with friends and bonds with her rebellious but caring mother, while the adults around them struggle with hard times, while living in the shadows of Disney World. Warm, winning, and gloriously alive, a deeply moving and poignant look at childhood.

Acclaimed debut feature by Rungano Nyoni, set in his birthplace of Zambia. After a banal accident in her village, 8 year old Shula is accused of witchcraft. After a quick trial, she is found guilty and locked up in a witches’ camp. A film that is equally parts comic, tragic and captivatingly beautiful.

Neo-Western murder mystery set on an American Indian reservation in Wyoming. Jeremy Renner stars as a veteran Wildlife Service tracker and Elizabeth Olsen stars as an FBI agent investigating the murder of a young Native American woman and uses the case to seek redemption for an earlier act of irresponsibility which ended in tragedy.

Surrealist filmmaker Alejandro Jodorowsky’s story of his years spent as an aspiring poet in 1940’s Chile. Against the wishes of his family, he leaves home to pursue his dream of becoming a poet and enters the bohemian inner circle of Santiago, including Enrique Lihn, Stella Diaz Varín, Nicanor Parra; all ultimately becoming driving forces of 20th century Hispanic literature.

Vibrant character portrait of a hedonistic young woman on the edge. Daphne (Emily Beecham) is entrenched in the daily rush of her restaurant job and an active nightlife full of new faces; her biting humour hides much unhappiness. She is forced to confront the inevitability of change in her life after saving a shopkeeper’s life when he gets stabbed in a failed robbery attempt. Also stars Tom VaughanLawlor.

Based on the acclaimed novel by André Aciman, a sensual, melancholic and transcendent tale of first love starring Timothée Chalamet and Armie Hammer. In Northern Italy in 1983, 17-year-old Elio begins a relationship with visiting Oliver, his father’s research assistant, bonding over his emerging sexuality, their Jewish heritage, and the beguiling Italian landscape.

An intriguing look at a culture whose unfamiliarity to many viewers will be rendered irrelevant by the story’s universally affecting themes and thoughtful approach. Within Brooklyn’s ultra-orthodox Jewish community, a widower battles for custody of his son. A tender drama, the film intimately explores the nature of faith and the price of parenthood.

Winner of the Berlin Silver Bear for Best Director; a comedy-drama about a Finnish businessman who meets a Syrian asylum-seeker looking for his missing sister. Hilarious sight gags, poker-faced one liners, and a toe-tapping rockabilly soundtrack, it is witty while also being humane, sincere and a pressing critique of the unforgiving bureaucracy that greets vulnerable asylum seekers in Europe today.

Golden Globe Winner for Best Foreign Film; a psychological thriller based on Philippe Djian’s novel. Isabelle Huppert stars as Michèle, a successful and ruthless video game company CEO. Being attacked by an unknown assailant changes her life forever. When she tracks the attacker down, she is drawn into a curious and thrilling world likely to spiral out of control.

Set in Cairo after the political events of June 2013, based entirely in the confines of a police van containing Muslim Brotherhood members and pro-army supporters, as well as other people belonging to neither of these factions. A white-knuckled tale of resistance and shared humanity that artfully evokes the political fault lines; a telling depiction of modern Egypt.

Isabelle Huppert and Jean-Louis Trintignant star in this French drama about a well-off family living in a bourgeois bubble in northern France, oblivious to the misery unfolding a few miles away in migrant camps in Calais. The Film forces audiences to confront and uncomfortably consider the dark side of human nature. 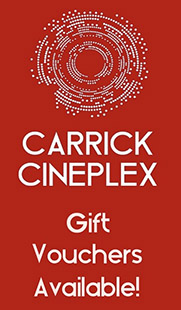 We can’t wait to welcome everyone back to @carrickcineplex! Steps…Read More >>>